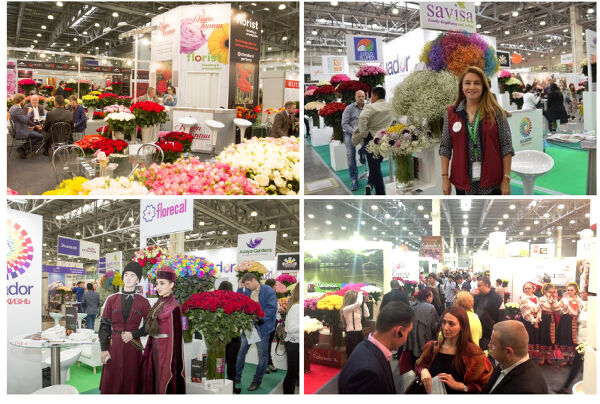 Here it is, the photo report of the FlowersExpo 2018. From September 11-13, growers, breeders and suppliers showcased their new and existing assortments at the Crocus Expo in Moscow, Russia. FloralDaily.com was present to make a full photo report of the show.

This year, the three-day event gathered 420 companies from 30 countries. Still a lower number than four years ago, before the crisis, but an increase compared to last year. And the organization is very pleased to have seen a higher number of Russian exhibitors this year. "The increase in the number of Russian exhibitors indicates a recovery of the sector. This year, 190 Russian companies participated, a growth of 12 percent compared to 2017”, says General Director of GreenExpo Exhibition Company and Director of the FlowersExpo Nadezhda Grigorieva. And the Russian nurseries seem to grow in size. Many of the Russian growers that were exhibiting at the show have plans to expand their nursery in the near future.

Leaders of the exhibition were again the main players at the show: the Netherlands, Germany, Colombia and Ecuador. In their national Pavilions they presented a wide range of floral and ornamental products that were targeted at the Russian market. This year, the largest number of participants came from the Netherlands (52), followed by Ecuador (49) and Colombia (20 companies). And the high number of Ecuadorian companies was also striking, considering that the majority is also exhibiting at the Expo Flor Ecuador in Quito this week, the week after the FlowersExpo. This indicates the importance of the Russian market to the Ecuadorian growers.

Florists, wholesalers and growers from all over Russia and the surrounding countries came to visit the show. For the growers and breeders, this not only offered a good opportunity to meet potential and existing customers, it also offers them the opportunity to see what varieties draw the attention of the ones further in the chain, the florists for example. It is clear that the Russians still love and will continue to love flowers. In general, the exhibitors were satisfied with the amount and quality of the visitors and find it comparable to last year.

The low and fluctuating value of the Ruble is causing a bit of tension and results in Russian buyers asking for lower prices or discovering other options, in the logistics for example, to gain back their financial loss. “No one likes to lose money, the Russian buyers don't either, so finding ways to cut costs is logical. Fortunately, financially speaking, they are doing much better than a couple of years ago. So, they have the money to buy, and, like any other company, do not want to lose it due to the change in exchange rate”, an exhibitor says. But pricewise, they are not at their former level yet. “The market has recovered, but at another price level, and the question remains if this level will ever be reached again”, another exhibitor says.