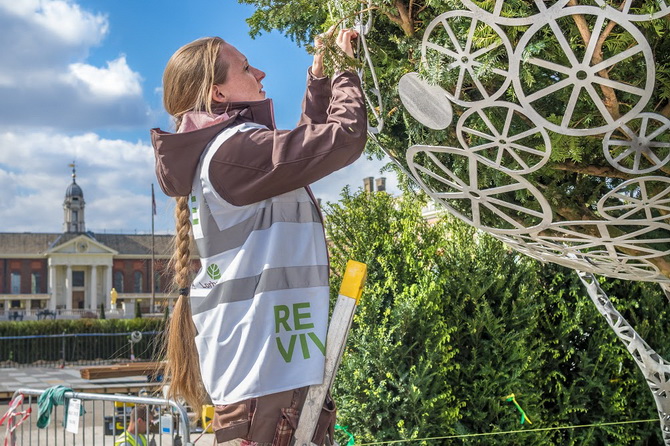 Tatiana Goltsova, Head of landscape company “DiLand”, was the second Russian Designer participating in the world’s most prestigious flower show over more than its 100-year history.

The central motif of the design is lacework traditionally associated with works of Russian lace makers. Over 1.2 thousand kg of aluminum was used for creation of this unusual garden.

The core of the garden is a tree with a clock hidden in its branches. The tree itself was eventually found after a long search in a  known German nursery Lorberg.

A lonely twisted with time and weather beaten yew braided with metal lace became the center of the garden.  And the clock’s arms in its branches always show eight minutes to eight, the symbol of infinity.

Tatiana Goltsova says, “The support of our projects by representative of the Russian Imperial family princess Olga Romanova, niece of Nikolai II, is an event one can’t believe in. To say that I am surprised or shocked means to say nothing.  I take it as a sign from heaven. A sign that our idea of revival of relations between people and countries, which we convey through the garden is really relevant.

“The Imperial Garden: Revive” project is conceived as a message from Russia. The time has come to revive relations between countries, people and nature. We can do it together. All we need is to focus on what unites us”.

The sponsor of the project is Imperial Garden, the largest garden center in Russia and Europe.

From the works of Russian landscape architects will present the exhibition "FlowersExpo", 13-15 .09.2016, Moscow, IEC "Crocus Expo".