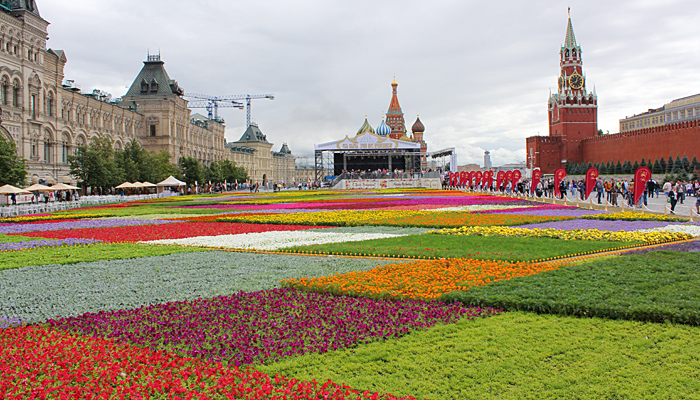 Russian flower market…  What are its peculiarities, needs and development prospects in new economic conditions?

This topical issue is scheduled for discussion with the professional community within the frameworks of the Business Program of the International exhibition “FlowersExpo’2016” (13-15 September, 2016, Moscow, IEC “Crocus Expo”).

Russia with its vast territories and different weather conditions of many regions where the production of their own flowers and ornamental plants is unprofitable is still the largest consumer and importer of flowers. The experts include it in the top six leading countries in consumption and import of all kinds of cut flowers after the USA, Germany, the Netherlands, Great Britain and France.

Growth in sales of cut flowers in Russia has been constantly increasing in recent years and has grown from 938 million pcs.  in 2005 to 1.75 million pcs. in 2014. The amount of flower sales according to different analysts accounted for over 4 billion USD where 90% is import.

The main suppliers of flowers are the Netherlands (44% of the market) and South American countries.  Colombia and Ecuador supply almost half of all cut flower (Ecuador: 36%, Colombia: 13%).

The largest share of imported flowers is sold in Moscow. According to experts the sales market here accounts for 17.5- 23% of the total sales in Russia.  Moscow is followed by Moscow region and St. Petersburg, 18% and 13% respectively.

As to the structure of cut flower import, rose ranks first – 43%. It is followed by chrysanthemums and carnation, 22 and 16% respectively. Over 60% of rose import both in kind and in value terms is supplied from Ecuador. The second place among rose supplying countries is occupied by Colombia.

According to marketing research of the world and Russian cut flower markets the growth of rose import to Russia is noted from all main supplying countries.

However, the highest growth rate is observed in Kenya. Import from this country increased over the past few years by more than 50% in quantity and value terms.

What are the changes the crisis of 2015 brought to the successfully developing Russian flower market? According to experts the decline in sales in real terms in 2015 occurred within 12-15%. At the same time due to devaluation of the ruble the figures in monetary terms have not changed much.

It should be borne in mind that the needs of the Russian flower market are satisfied not only by imports but also through domestic production.

Domestic production of cut flowers and marketing of nursery floral and ornamental products in Russia have been growing rapidly. This growth was achieved due to introduction of new greenhouse complexes and due to the recently built facilities that achieved their full capacity.

By 2015 the area of modern flower producing greenhouses reached 168 ha. They are furnished with state-of-the-art equipment, use the latest technologies and have competent specialists. Their weak link is planting stock which is mainly supplied from European countries (mainly from Holland). No single company in Russia is engaged in production of certified planting stock.

Over the last 4 years domestic production of cut flowers have increased 2.5 times and reached 15% of the total sales.

The Central Federal District accounts for the largest volume of cut flowers production in real terms. It is due to an increase of investments and building of new greenhouses there. In the nearest future new flower greenhouses   will be commissioned in Kursk, and greenhouse production areas in Belgorod will be enlarged. The production is drawn towards southern territories.

According to medium-term forecasts the growth of cut flowers production in Russia will considerably outpace the growth of import.

Speaking about flower import without which it is impossible to meet the demand of the Russians for flowers, like in any import-dependent segment, the Russian flower market responded to soared currency rate by increasing the final flower cost and reducing volumes.

According to experts in 2015 the reduction of volumes in the Russian flower market was within 12-15%. At the same time due to the ruble devaluation, monetary indicators remained practically unchanged.

According to “RoyalFloraHolland”, which in spring sales of 2016 paid special attention to the Russian market, due to the latest events flower sales in Russia for 8 March was under considerable pressure (the turnover fell by 8%).

However, our market has its chance. Specifics of the Russian flower market is that flowers for the Russians are still a very important and essential attributes of holidays, family events and  public celebrations. And despite the crisis the demand for flowers is   still at a sufficiently high level.

Therefore experts say that despite serious decline in consumer interest and a number of technological difficulties, the Russian market still remains interesting for investors.

In 2016 further decline is not expected. Moreover according to the market participants in the current year the market will not only maintain its positions but will go up and the growth rates will be increasing as the crisis in the country’s economy is overcome.

According to forecasts of analysts from BusinessStat the sales will reach 2.16 billion pcs in 2019 exceeding the level of 2014 by 23%.

The main growth drivers are floristic services and sales growth thanks to increase in the average purchase frequency. Gradually flowers will not be looked upon only as a holiday attribute. Following the global trend the Russians will start to consider flowers as a daily attribute of home décor elements.

It is forecasted that, having overcome the crisis in the next 10 years Russia will take the second place in Europe after Germany in the volume of flowers imports. The actual capacity of the Russian flower market is still estimated by experts at $ 40 billion.