Stability: One of the key words at FlowersExpo Moscow

The FlowersExpo in Moscow ended yesterday and one of the key words among the exhibitors at the show was stability. The ruble that used to fluctuate heavily after the country was hit by the crisis three years ago, now seems to be more stable. In turn, for many growers it resulted in an increasing demand and sometimes even better prices. Even though these differences are not that significant it gives growers and other floral enterprises faith in the country and its recovery.

The majority of the imported flowers sold in Russia are imported from South American growers. When asking them about the importance of this market, we still see it as an important market, but the importance has decreased a bit. As the crisis kicked in, the prices dropped due to the devaluation of the ruble. The ruble fluctuated heavily, which made growers decide to expand their markets and therefore decrease their volumes to Russia.

Fortunately, the ruble seems to have become more stable against the US dollar, which results in an increase of the long standing orders. On top of that, several South American growers see a slight increase in demand and in some cases even an increase in price. The numbers are far from the old level, but the growers have good hopes that it will increase. They are, however, more hesitant about the recovery of the prices.

Also the Dutch exhibitors see a recovery of the market. Just as for the South American growers, the fluctuating exchange rate of the ruble against the euro has been the bottle neck for many Dutch growers. At least, the Dutch are important flower suppliers of this country too. At the same time, they see opportunities to enter the market with new products and educate the Russians how to use these products.

Stability, however, does not really apply to the Kenyan growers. They drastically increased their sales to Russia over the last years.

FloralDaily
FloralDaily was present at this three-day event to make a full photo report and review the developments in the Russian floral industry through interviews with suppliers, growers and visitors. The photo report will be published on Monday 18 September, but below a small preview: 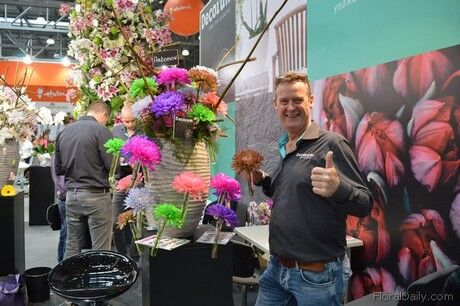 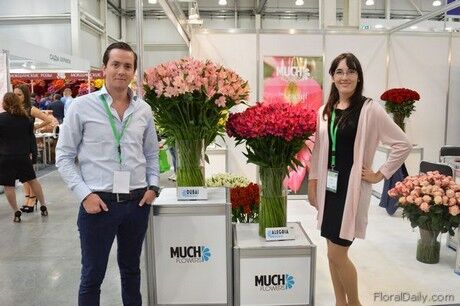 Javier Mantilla and Anna Semensko of Much Flowers. They grow several flowers in Ecuador and lost quite some volumes during the crisis and they are now trying to recover what they've lost. Over the last year, the demand increased. 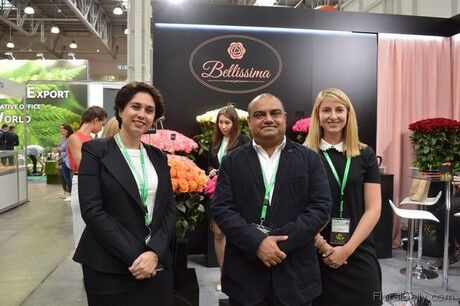 Farah Samji, Vishal Mehta and Hannah Cunynghame of AAA Roses. They are exhibiting at the show for the first time and are introducing their  Bellissima branded high altitude roses to the market. And their roses seem to fit in the market as they attracted the attention of many importers. 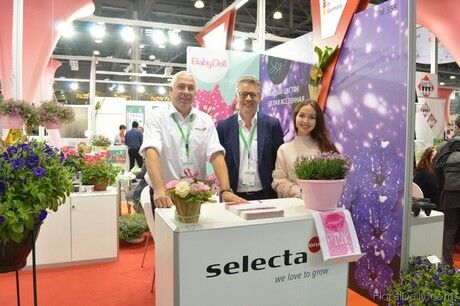 Matthias Tillmann, Peter Nederhof and Anara Moldakapasova (interpreter) of Selecta one. At the FlowersExpo they've put the Pink Kisses in the spotlight.