The FlowersExpo 2017 is over and again this year the positive vibe at the show was filled with hope and trust. From 12 till 14 September, growers, breeders and suppliers showcased their new and existing assortments at the Crocus Expo in Moscow, Russia. FloralDaily.com was present to make a full photo report of the show. 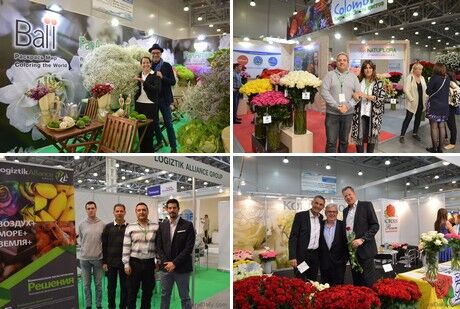 This year, the three-day event again gathered together 400 companies from 27 countries. The number of exhibitors is still lower than three years ago, before the crisis when 500 companies exhibited at the show, but the management of the show sees a positive development. "The number of Russian participants grew in 2017. For them participating in the exhibition is not a PR campaign but a demonstration of their sustainable development and opportunity for further business expansion. This, in turn indicates their more positive financial situation", says General Director of GreenExpo Exhibition Company and Director of the FlowersExpo Nadezhda Grigorieva.

Leaders of the exhibition were again the main players in the world flower market: Netherlands, Germany, Colombia, Ecuador and France. In their national Pavilions they presented a wide range of floral and ornamental products that were targeted at the Russian market. The largest number of participants came from Ecuador (45 companies), the Netherlands (44 companies) and Colombia (27 companies). The number of Kenyan companies at the exhibition has increased significantly this year. This is mainly due to the growth of import of roses from Kenya to Russia. In recent years they have significantly outpaced all other countries and have grown by more than 50%.

Florists, wholesalers and growers from all over Russia and the surrounding countries came to visit the show. For the growers and breeders, this not only offered a good opportunity to meet potential and existing customers, it also offers them the opportunity to see what varieties draw the attention of the ones further in the chain, the florists for example. It is clear that the Russians still love and will continue to love flowers. In general, the exhibitors were satisfied with the amount and quality of the visitors.

The low and fluctuating value of the ruble has caused a decrease in sales for many foreign exhibitors over the last couple of years. Fortunately, the value of the ruble has been fairly stable over the last months, which creates hope and trust in the Russian market for the future. "The ruble is still low in value, but it does not fluctuate heavily anymore. Therefore people dare to make choices again and buy", says one of the exhibitors. "After the crisis, three years ago it has been tough, but the market is recovering. The demand is increasing, the only question is if the prices will ever reach their former level", another rose grower says.